Off-campus Visit to the IFAD headquarters in Rome

On Monday 11 April 2016, the 1st year of Global Governance visited IFAD headquarters in Rome. This visit’s main goal was to provide the students with some knowledge regarding what IFAD’s task is and how it is organized.

First of all, IFAD stands for “International Fund for Agricultural Development”, and indeed its motto is “investing in rural people”. It is an international financial institution and a specialized UN agency, but at the same time it acts like a NGO, especially in its approach toward the fight against poverty.
In order to develop the agricultural sector of the poorest countries in the world, IFAD provides different types of financial aids – mainly low-interest loans and grants. IFAD membership comprehends 176 countries from all around the world, including OPEC (Organization of the Petroleum Exporting Countries) and OECD (Organization for Economic Co-operation and Development) members and both developing and middle-income countries.

The visit was organized in six presentations, each one of about half an hour: the first two were addressed by Mattia Prayer Galletti; the third one by Fabrizio Felloni and Simona Somma; the fourth one by Edward Heinemann; the fifth one by Gernot Laganda and finally, the last one by Richard Aiello. 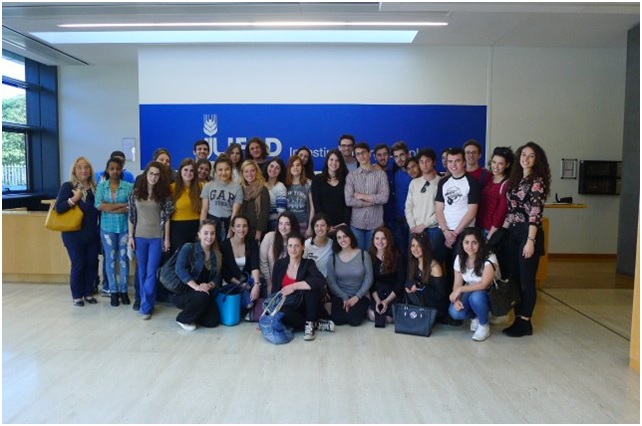 Mr. Galletti, Lead Rural Development and Institutions Specialist, dealt with the goals of sustainable development: no poverty; feed hunger; gender equality; economic growth – these goals can only be reached through policies of empowerment and innovation. Single governments cannot solve these specific problems on their own, so they have to rely on the partnership with IFAD. In fact these governments have to cope with weak institutions, high transaction costs, low capacity and low access to credit and markets. Moreover, IFAD has developed an anticorruption policy to mitigate this risk in the countries; in order to make it possible, all accounts have to be supervised and the projects are controlled on annual base to make sure that there is an adequate cooperation among institutions.
Mr. Felloni, Lead Evaluation Officer, and Mrs. Somma, Evaluation specialist, addressed the issue of project implementation and project impact to benefit the rural poor. They both work in the Independent Office of Evaluation of IFAD (IOE) that is in charge with the drafting of the ARRI (Annual Report on Results and Impacts). This report summarizes all the evaluations regarding IFAD finance policies and strategic programmes, at the end of each year, and it is later presented to a board of directors that represents the countries. The aim of ARRI is to improve the transparency and performance of these operations. In this year’s report, they stated that a great share of projects has worked well – rural poverty impact, gender equality, innovation – while there are still some areas that need to be improved – sustainability, environment, monitoring and evaluation.
Mr. Heinemann, Lead Policy Specialist, focused on the policy engagement as a central part of IFAD development work. He showed us that policies work on two different levels: a global one (WTO, World Trade Organization) and a national one (ARD, Agricultural Role Development).  ARD provides incentives for both public and private investments, giving priority to three dimensions: economic, social and environmental. For what concerns the economic dimension, the goal is to ensure that agriculture can provide cheap food and raw materials; on the social level, farmers need to live in a more decent way; finally, the environmental dimension highlights the importance of preserving the fields and their surroundings. The question is: why should IFAD be involved in policy issues? Also in this case, as we have seen above, IFAD aims at giving a broader contribution to poverty reduction, improving project performances and expanding development impacts.
Mr. Laganda, Lead Climate Change Adaptation Specialist, underlined the topic of “resilience” to climate change, with respect to farmers. First of all we have to say that climate change has a great impact on agricultural development, as it is highly dependent on weather and natural rhythms. In fact, due to the unusual variability of temperatures, crop yields are becoming less and less predictable, causing a change in irrigation demands. Due to the link between agriculture and other sectors, climate change provokes a chain effect, damaging public health, forestry, water resources, coastal systems and ecosystem services as well.
To conclude this experience at IFAD, 1st year Global Governance students had the pleasure to meet Mr. Aiello, Chief of Staff Development, who briefly illustrated how to enter the world of IFAD. What is needed is a broad portfolio of international job experiences, together with a good knowledge of at least three languages – possibly French, Spanish and English. These features are required in order to join an Internship or a JPO (Junior Professional Organization) programme, which represent the two main ways to shape a UN career.